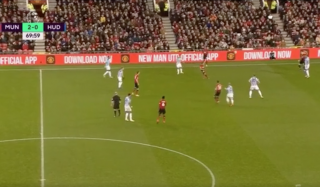 A sublime piece of footage went under the radar from Manchester United’s 3-1 win over Huddersfield at the weekend.

It only further proves that this bunch of players have needed a coach that will allow them to express themselves rather than worry about the opposition and the strengths they pose.

Juan Mata plays a perfect volleyed pass across the pitch to Luke Shaw from a throw-in. We already know what the Spaniard is capable of, though we didn’t quite see enough of it under José Mourinho.

And, while Solskjaer may prefer Jesse Lingard, there’s still a chance he will be able to rotate most weeks knowing what quality he has available.

That may the biggest test of all for Solskjaer between now and the end of the season. Deciding who to start most weeks and keeping everyone happy.

Romelu Lukaku and Alexis Sanchez will be back in the team soon, but they must also take their opportunities. Marcus Rashford has done nothing wrong thus far and is already performing better under the new manager.

Check out Mata’s sublime pass below.

Mata plays a perfect volley pass across the field to Shaw from a throw-in, pure class! from r/reddevils