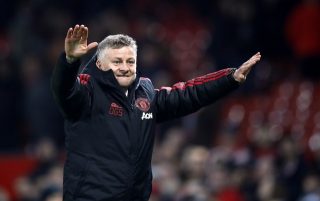 Ole Gunnar Solskjaer has had the perfect start to life as Manchester United interim boss with two wins from two.

Recognised as a club legend by every United fan, scoring 120 goals during his 11-years at Old Trafford as a player, Solskjaer replaced José Mourinho in the hotseat a week ago.

Solskjaer will be sure to take advice from former manager Sir Alex Ferguson should the Scot ever feel the need to have a word with one of his better strikers.

However, it remains to be seen whether Solskjaer can do enough between now and the end of the season to convince the United board to give him the manager’s job full-time. He certainly sounds keen and has been smiling ever since being appointed as caretaker manager.

According to The Sun, Spurs are concerned about losing Mauricio Pochettino to one of Real Madrid or Manchester United. The Argentine coach has also been tipped as a candidate to takeover at Old Trafford, though his lack of trophies is leaving many concerned.

During Friday’s press conference, a journalist asks Solskjaer about the impact the past week has had on him. Solskjaer replied, as quoted by the Daily Star: “In a football team, you always look at different things to improve on.

“But I’m coming in from the outside, so it’s hard to make a difference.

“My job has been to seek to the players, trying to get to know their feelings and know what their confidence levels are.

“Every single player has a responsibility to improve.”

He also stressed that there are still issues with the squad – but at least Solskjaer is getting the best out of his players, unlike Mourinho.

“There are things we need to improve,” he continued.

“We’re in this position for a reason. We’ve not been consistent enough, we’ve not been able to keep clean sheets.

“And we’re not scoring enough goals.

“So the open play and defending has been good but we need to get back to the habit of not conceding goals.”

But some United fans believe the Norwegian should get the full-time gig as manager. See the tweets below.

PT 1- Unpopular opinion: why not just give Solskjaer the job? He’s brought positivity back, plays the United way and brings youth into the team. Feel like too many fans want instant success when this is what we’ve missed. Too focused on buying or appointing people because they’ve

If Solskjaer performs well, I’d want him to have the job full time.

The players might fall out with Pochettino and, he will struggle. They can hardly do that under Solskjaer.

Both are playing attacking football and, pressure can throw Poch off his game https://t.co/nLwpt5OkXT

The first two games under Solskjaer have been about the players gaining confidence and playing with freedom while getting results, which means he is doing his job. Tougher tests lie ahead for him. #MUFC

Me personally, I think #ManUnited would be wise to give #solskjaer the job permanently. What can the guy do in 6 months? He’s a nice guy, good with the media, popular with fans + players. Give him the job @ManUtd @Pschmeichel1 @GNev2 @henriklarsson @MENnewsdesk @BBCSport #MUFC

Since Fergie left we’ve finished a combined 97 pts behind the champions. All managers with pretty hefty CV’s.

I wouldn’t rule any man out for this job. #MUFC

The job Ole Gunnar Solskjaer in turning around Man Utd is not a miracle he’s playing the right cards. Playing the big players, playing attacking football and not getting into confrontation. Doing everything Jose did not do #mufc