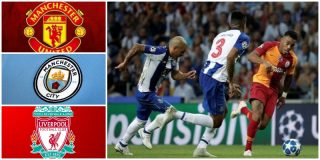 Manchester United have been heavily linked with a move for FC Porto centre-back Eder Militao since the summer, however, reports now emerge that Liverpool are interested in signing the Brazilian.

The Express noted earlier this week that United were fancied as favourite to sign the 20-year-old. It was also suggested that the Reds were handed a boost with Militao’s release clause expected to remain at €50 million.

However, it now seems as though United have competition on their hands if they genuinely want to bring Militao to Old Trafford, with The Express now adding that both Liverpool and Manchester City and interested in the highly-rated youngster.

Liverpool have been a lot more solid at the back than both Manchester clubs, who may need to dip into the January market to settle things defensively. City could end up conceding a title as a result and United are already in a poor position as it is…

The Scousers dramatically changed the shape of their defence a year ago by signing Netherlands international Virgil van Dijk. He’s been a monster at the back for Jurgen Klopp’s men and it shows how important it is to a team to get it right at the back.

With Phil Jones, Chris Smalling and Marcos Rojo among Ole Gunnar Solskjaer’s options at the back, United definitely need a new addition or two at the back. Eric Bailly and Victor Lindelof should both have futures at the club given their experience and previous performances at this level.

Though time will tell if any of the three Premier League clubs linked with Militao end up signing their man, but it’s clear the youngster is making a good impression since moving to Europe.

We can expect to hear his name again.