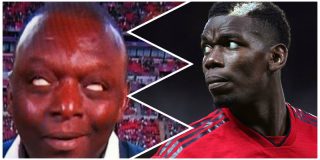 Just do you know, it is completely possible to pass praise or criticism about Paul Pogba without mentioning the Frenchman’s hairstyles.

That may not seem to be the case for BBC Sport pundit Garth Crooks, who named Pogba in his team of the week after scoring two goals against Huddersfield Town.

“Two well-taken goals against Huddersfield have laid down a marker,” Crooks wrote for BBC Sport. “His dreadful hairstyles have also slowly disappeared as well.”

We are finally starting to see the Pogba we wanted after spending £89 million to secure his signature from Juventus, as per The Telegraph. He was signed and expected to quickly become a man and a leader but now, with a change of manager, United fans are seeing the French midfielder doing what he does best.

United shine when Pogba shines. He may go missing in a lot of games, though few players can replicate what he does on his day.

He has been directly involved in four goals in the last two Premier League games under interim boss Ole Gunnar Solskjaer, the same total he had registered in his last 12 games under José Mourinho – one goal, three assists.

So, the improvement is clear. Now we must wait and see if he can do it between now and the end of the season and help United push for a top four finish.

Here is what Crooks had to say about Pogba’s performance against Huddersfield: “I really hope these are the signs of a much more mature player. With Jose Mourinho gone, Pogba is also starting to play with a freedom that was absent earlier in the season. Graeme Souness has given the best analysis of Pogba I have ever heard. Should Pogba happen to listen to the Liverpool and Scottish legend, he too could become a really great player.”