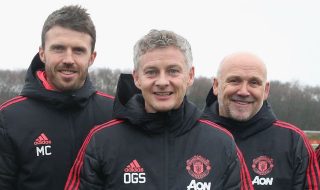 So after José was sacked there was a set of mixed feelings. Old Trafford had clearly become as toxic as Chernobyl under him, so his removal was essential if we were to try and recover from the horrendous state we were clearly in at that point.

When all the possible replacements were being banded about, I saw Ole’s name and was powerfully underwhelmed. It was the managerial equivalent of those sh*t memes about being hungry and being told by your mum to have fruit! Or that you’d heard the ice cream van and been told to get a choc ice out the freezer instead. There’s nothing wrong with the idea of it, but nothing about this suggested solution to an issue excites or thrills me.

When his arrival was confirmed, it did more to underline how deeply the shambolic nature of the club runs these days than it did to raise my hopes of a better season to come.

But here’s where it changed for me. He did his press conference stuff and if there was a bingo card of all the things I’d want to hear for the happiness full house, well he nailed every one of them in beautiful style with his gloriously Mancunian accent.

But the actual game against Cardiff would be the first measure of his actual impact on the players and ability to do the short-term job he’s been brought in to do. It was beautiful from the first whistle to the last. We played with passion, energy, movement and a desire to attack that broke Cardiff down almost at will throughout the game. We scored 5, but in no way whatsoever did that scoreline flatter us.

I went into today’s game with similar concerns. Batter these low level peasants and what does it even prove?!?! Fail to beat them and clearly Cardiff was a one off that we managed to blag our way through on a 90 minute high of the players playing their game free of Mourinho’s tactical shackles.

But it was another glorious performance. A team playing with a freedom and swagger we’ve rarely seen since the great man chose to retire.

I know this is highly unlikely to lead to United achieving anything to add value to the honours list this season. But what I’m genuinely excited about, is that while I prepare myself for an end of days scenario, where Klopp has a Premier League winners medal hung round his neck, while he’s gurning like he’s done a bag of spice that’s as big as Cineworld popcorn, we will at least see some free flowing attacking football from players who want to do the shirt justice.

After a few months of seeing the players and manager turn in a level of passion for the job that’s made my own low key minimal possible effort look incredible by comparison, it’s just beautiful to see that there is something at United that’s worth looking forward to for the rest of this season at least.

F*ck the summer, and Ed’s next f*cked up attempt to deliver a manager, and a long-term strategy that can put us back into contention for major honours, I’m all about enjoying the fruits of a club legends labour and the beautiful performances and results it will deliver us in the coming weeks and months.