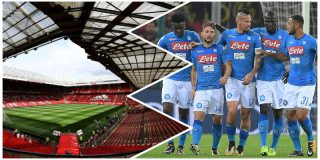 Serie A outfit Napoli have confirmed they have rejected a bid worth £95 million from Manchester United for defender Kalidou Koulibaly.

A colossal centre-back, quick and strong, Koulibaly should be on every United fans’ wish list if the club is to spend big on a defender.

Make no mistake about it. He’s been a rock at the back throughout his time in Naples and it’s an area United desperately need to strengthen.

According to The Sun, back in early December, José Mourinho made the Senegal international his top defensive transfer target for the January window. The report also suggested that United had been told they must pay more than £90 million for his signature.

But that amount clearly wasn’t enough as The Sun quote Napoli president, Aurelio De Laurentiis, confirming they have rejected a £95 million offer.

“But now it’s impossible that he leaves Napoli.”

Firstly, how is it impossible that he leaves the Italian club? There should be plenty of interest in Koulibaly in the coming months. It would be a surprise if a bigger offer than suggested is made with Real Madrid, Barcelona and United all needing recruitment at the back.

We could certainly do with a defender of Koulibaly’s ilk.