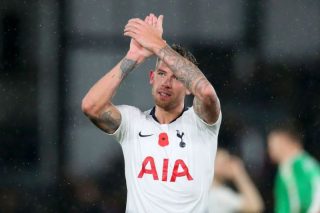 Could Manchester United be about to find themselves in a stronger position to sign Tottenham Hotspur defender Toby Alderweireld?

The Independent claimed during the summer that Alderweireld was listed as a priority signing by former United boss José Mourinho, however, a deal never materialised.

Spurs manager Mauricio Pochettino has today confirmed that the London club intend to trigger an optional one-year contract extension in his clause, consequently turning attention to a £25 million release clause in his current deal.

According to the Manchester Evening News, the £25m release clause could be activated up until the last two weeks of the summer transfer window, allowing United plenty of time to make a decision on Alderweireld.

The Reds initially showed interest in signing Alderweireld with Mourinho as manager but Portuguese tactician has since been axed, so it remains to be seen whether Ed Woodward sees the Belgium international as the right signing to improve United’s defence.

Alderweireld, 29, is better than the vast majority, if not all defenders currently at Old Trafford. The likes of Victor Lindelof and Eric Bailly could learn a thing or two by playing alongside the experienced former Atletico Madrid centre-back.

But Spurs remain keen to keep hold of Alderweireld, even if they risk losing him for cheap in the summer.

Pochettino spoke about Alderweireld at a press conference ahead of Spurs’ clash with Wolves in the Premier League.

“Yes, for sure,” Pochettino stated, as per The Express. “It is obvious. It is the same situation as Jan [Vertonghen].”

Perhaps Pochettino, reportedly linked with the United job by the Daily Star, is looking further down the line. The Argentine may feel the Reds need a top class defender and Woodward may also see this as an opportunity to weaken Tottenham.