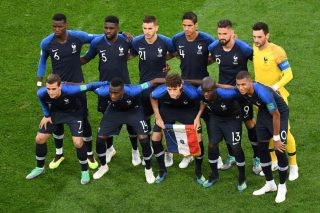 Atletico Madrid defender Lucas Hernandez is currently being linked with a transfer to Manchester United, despite bubbling interest from Bundesliga giants Bayern Munich.

According to Marca in Spain, Atletico are doing their best to hold off interest from the German club until the summer at least. This makes sense as no club wants to lose an influential figure midway through a season, and Diego Simeone’s men still have plenty to play off.

The Madrid club are second in La Liga, three points off leaders Barcelona, and they will take on Serie A champions Juventus in the last 16 of the Champions League. That means any potential January swoop for Lucas Hernandez would see him cup tied in Europe’s most prestigious competition.

Both Bayern and United have been linked with the Frenchman. There has even been suggestions that a £72 million move could be on the cards in January when the transfer window reopens.

It’s a lot of money to pay for a player without a full-time manager in position, or without a director of football when the club plans to appoint one before next season.

Surely it would make more sense to hold back on massive transfer deals until the club knows what direction the new manager or director of football wants to take with the team?

Bayern could do with a lift as they look set to concede their Bundesliga title this season as Borussia Dortmund rise to prominence once again.

Still, recent reports suggest there’s an expectation that United will rival Bayern in any move.

Perhaps Paul Pogba should drop me a message on WhatsApp?