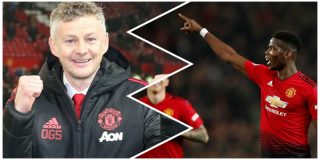 It is a habit football fans possess with increasing regularity getting carried away, but you would be hard pressed to blame even the biggest Scrooges at Christmas revelling at the start Ole Gunnar Solskjaer has made at Manchester United.

Even if the footballing Gods are Nordic, in handing Solskjaer a generous set of opening fixtures, two wins in a week represent significant progress on the overall mood we were enduring as recent as Monday 17th December.

The toxic clouds of doom, gloom, excuses, negativity and viruses have been well and truly lifted in the space of nine fun-filled days of Ole.

Funny how that’s all it has taken to see an upturn in fortunes. Inevitably, players respond to the new manager bounce with gusto, but a little bit of man management, reminding the players of the honour and privilege (rather than burden) it is to wear that United badge, releasing the chains and getting smiles on faces – hardly rocket science.

It is plain to see that many United fans, myself included, are harbouring for Mauricio Pochettino to take the full-time helm. With good reason it must be said, the work he is doing, on limited resources, is incredible.

Two swallows of course do not make a summer, or a pitch for the permanent job, but if Solskjaer continues to win the hearts and minds of players and supporters, how amazing would that be for the powers that be to have a genuine dilemma involving someone who clearly ‘gets’ the club?

It goes without saying that it looks underhand from the players, in particular a now flourishing Paul Pogba, to suddenly perform after months of suffering but it’s a two way street — get a manager who goes out of their way to create a harmonious, happy, vibrant atmosphere and results, in any stream of work, typically follow.

It was often speculated what another manager, irrespective of Curriculum Vitae, trophy hauls or experience, could do with a heavenly plethora of talents at their disposal. The difference in tone is stark: When you hear Solskjaer purr at the likes of Martial, Sanchez and Lukaku to return to the fold, you cannot help but think Mourinho would have bemoaned the injury list. Sure, Solskjaer has not been blessed with genuine quality at the likes of Molde and Cardiff, but you can sense a real delight at the choice of player he has at United, rather than bleat about needing more money.

You could not help but beam at the babyfaced expression on Solskjaer’s face during his playing days, but add the sense of pride and honour to the mixture and his popularity is sky high.

Undeniably, Solskjaer has yet to be properly tested by his opponents, but as far as his first nine days are concerned, he has achieved a great deal, getting everyone associated with the club onside, I mean when was the last time you got that match day excitement under Mourinho?

Two wins over Cardiff and Huddersfield, in isolation, would not be celebrated like this but it’s nice to slowly be getting the feel-good factor back.

Two wins over Cardiff and Huddersfield will not make us immune from our flaws yet to be exposed again but it has been the perfect start.

Paul Pogba is no saint by any stretch of the imagination, but Solskjaer is turning out to be a great piece of anti-virus kit.