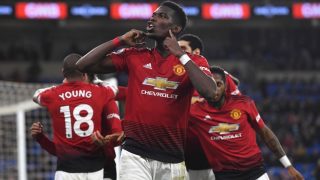 Paul Pogba has frustrated a number of Manchester United fans for performing below par since returning to the club in 2016, but Phil Neville now believes the club has the best midfield in Europe in their ranks with the Frenchman.

The World Cup-winner scored his second brace of the season in United’s convincing win 3-1 win over Huddersfield on Saturday. This was a further sign that the shackles are off and the players are being allowed to express themselves under interim manager Ole Gunnar Solskjaer.

José Mourinho, on the other hand, completed sucked the joy out of football in his last six months at the club and had to be replaced. Now there’s an outside chance United will get top four as a result.

Neville appeared as a pundit on BBC’s Match of the Day on Wednesday night. He singled out Pogba and praised the Frenchman.

“They had the best player on the pitch and probably the best midfielder in Europe on his day in Paul Pogba who has had a disappointing, horrendous last 18 months at the club because of the fall-out with the manager,” Neville said, as quoted by the Manchester Evening News.

“It looked like the shackles were off today playing with that freedom of expression, anything is possible type attitude, playing with arrogance. The passing was back to his best.

“Look, he is the best player at the club when he is at his best and with performances like this. He should be a 12-15 goal a season person – he hasn’t been that in his career so far but he can be.”

Pogba also received praise from Solskjaer after his performance against Huddersfield, also quoted by the MEN.

“I’m spending time with the players, of course, and trying to get as much time with each individual as possible,” Solskjaer said. “And Paul is one that really enjoyed [today], last time he creates two or three goals, this time he score two himself. I think he’ll enjoy this tonight.

“And when you play football for Man United you should be happy, it’s a responsibility, but it’s an honour and a privilege. And Paul loves playing for this club, he’s a Man United boy through and through, he’s a kid that knows what it means to play for Man United.”

There’s certainly a reason to get excited about Pogba at the moment, though I can’t help but question why we didn’t see more evidence of this form since he re-joined the club? He still got paid despite not being in total favour of the manager, so what happens if he decides next week that he can’t be arsed with Solskjaer any longer?

Time will tell if Pogba can become the player we know he can.