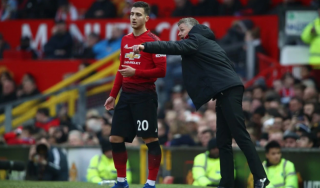 Manchester United have confirmed that Diogo Dalot was the fastest player on the pitch at Old Trafford during yesterday’s 3-1 win over Huddersfield in the Premier League.

The Portuguese youngster registered a top speed of 34.69 KPH during the match with the Reds winning convincingly.

A lover of the step-over, Dalot looks an exciting prospect for the future, though there are still areas of his game that remain raw.

Interim manager Ole Gunnar Solskjaer has made it clear early on that he wants his full-backs to provide width high up the pitch – the polar opposite to what José Mourinho asked of Antonio Valencia, Ashley Young, Luke Shaw, or whoever else he decided to play in those roles.

And, a player like Dalot should enjoy this freedom. He always looks to get forward with the ball when in possession and Solskjaer was trying to get midfielder Fred to play the former FC Porto defender down the line more often against the Terriers, though he didn’t take the instructions very well and drifted inside with the ball instead.

It’s promising that he’s getting games in his first season. Dalot could be our right-back for many moons.