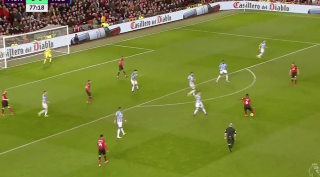 Paul Pogba has netted a brace against Huddersfield Town with a screamer from 20-yards.

The Manchester United midfielder only scored to make it 2-0, though he’s made it 3-0 shortly after with an absolute peach of a goal.

This is the player we expected when Pogba re-joined the club from Serie A giants Juventus.

It looks like he has been given a new lease of life under interim manager Ole Gunnar Solskjaer and his relationship became strained under former manager José Mourinho.

Hopefully, he can drive on and finish this season strongly between now and the end of the season.

There will be calls for the next manager and Solskjaer to build the team around Pogba!

Check out the goal below. It was a peach of a goal.