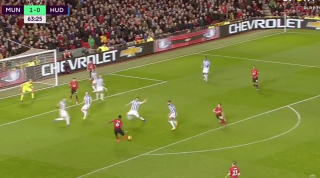 Paul Pogba makes it 2-0 for Manchester United against Huddersfield Town.

The Frenchman smashed the ball at the edge of the box after it was played by substitute Ander Herrera after some great build-up play.

Despite falling out of favour with previous manager José Mourinho, Pogba has performed well in his last two games under Ole Gunnar Solskjaer.

Creating assists and scoring goals… What more could we ask for from our star midfielder?

Ole Gunnar Solskjaer will be proud of his players for responding to Huddersfield’s pressure in the second half this way.

They’ve stuck to their tactics by playing attacking football and just got what they deserved with a quality Pogba goal.

This is a player very much back in favour!