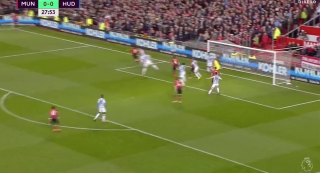 Manchester United take the lead against Huddersfield, thanks to a goal from Nemanja Matic.

The Serb has been partnered by Fred in the middle of the pitch with Paul Pogba playing further up the pitch behind Marcus Rashford.

It was the first home goal of Ole Gunnar Solskjaer’s reign as interim boss.

The goal came from a set-piece with Victor Lindelof heading on a corner towards Matic, who waited closer to the goal before finishing an important opening goal which should take the edge off this game a little.

United have been playing well so far with patient build-up play in and around the Huddersfield penalty area. The Terriers initially sat back in compact style, but were unable to keep Solskjaer’s men out.

The goal was definitely deserved and should force Huddersfield in coming out to play.

That should only end one way… More goals for the Reds! After all, this is exactly the sort of football we should be expecting at Old Trafford.