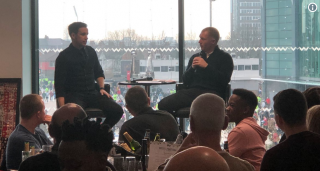 Paul Scholes has always made it clear he didn’t enjoy the football Manchester United played under José Mourinho. The club legend had fans laughing at a pre-match event at Hotel Football.

Sometimes it frustrated fans, though when you sit down to consider Scholes’ complaints, they were always quite measured during BT Sport’s coverage of United games. Some just felt he was bitter because Ryan Giggs didn’t get the job after Louis van Gaal.

However, Scholes should be able to enjoy football again with Ole Gunnar Solskjaer, former teammate and now interim manager at Manchester United, now willing to play with an attacking style.

United won their first game with Solskjaer in charge 5-1 against a poor Cardiff City side, but the biggest positive came as the players were allowed to express themselves. Even Victor Lindelof was seen entering the opposition’s half on a number of occasions.

Scholes is at Hotel Football for a guest speaking event and when asked if he’s welcome back to Old Trafford, he replied with a trademark sense of dry humour, as picked up by Red Army Bet.

Paul Scholes at @hotelfootballuk ahead of today’s game. Asked if he’s allowed back in Old Trafford?

Scholes: [laughing] “I am now” pic.twitter.com/73D5JaYQY0