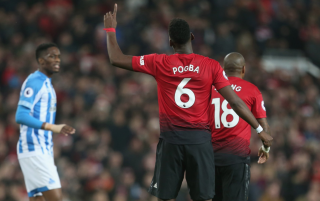 With six points from two games it finally looks like the Reds are about to go on a run of wins, so there’s every reason to be happy this festive season.

Ever since the Norwegian arrived at Old Trafford as interim boss, he’s had a non-stop smile on his face, though that may have took a brief break when Huddersfield scored from a set-piece to make it 3-1, thanks to Mathias Jorgensen.

That goal means United have not managed to keep a clean sheet in a win in the Premier League since September 2. The cause being our defenders switching off during a crucial moment.

But they didn’t have enough quality or fuel in the tank to build on their goal.

Here is how United fans reacted to the result and performance on Twitter.

Pogba in the 2 games since Mourinho was fired:

AND SOLSKJAER HAS WON IT!

**His first match at Old Trafford as United manager #MUFC

Gutted no clean sheet, but Pogba has been incredible and Ole is working his magic. Transforming the team. Up the Reds.

Almost a bit of dangerous naivety about United at the moment, but I’ll take that as the footballs better to watch already than the shit we were served up by the boring one, two wins for Ole now, onwards and upwards

Points to take at FT: