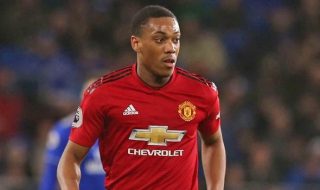 Manchester United fans are wondering where Anthony Martial is after Ole Gunnar Solskjaer named his line-up to face Huddersfield on Boxing Day.

The Frenchman is missing from the matchday squad, not even making the bench, and has been replaced by Juan Mata.

Solskjaer made a total of three changes from his side that beat Cardiff City 5-1 last week. It was his first game in charge as interim boss and he could not have asked for a better start.

United shouldn’t find it too difficult to break down Huddersfield. Hopefully, Martial’s absence isn’t felt too much.

Below is a series of tweets from United fans questioning Martial’s whereabouts… It has been suggested that he is unwell.

Martial ‘ill’. Could be back for Bournemouth on Sunday.

Anthony Martial has the highest conversion rate (42.11%) of any Premier League player to have at least 10 shots this season:

Man Utd are missing their most clinical forward. 🎯 pic.twitter.com/MAmGuCtTFS

Anthony Martial out for Man Utd through illness, but Solskjaer hopes he will be back to face Bournemouth. Dalot, Fred & Mata come in. Lukaku absent from the squad again

Decent XI that. Glad that Dalot & Fred start. Happy to see Gomes on the bench too. Hopefully Ole brings him on in the second-half. Shame that Martial isn’t in the squad (must’ve picked up a late injury), but even so, that team should be beating Huddersfield comfortably. UTR. 🔴

Given Martial is ill still like the look of that XI. 3-0.