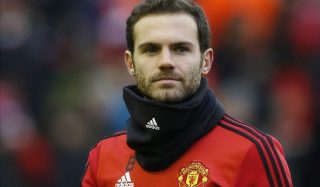 The Norwegian got off to a perfect start as interim boss last week as the Reds ran out a 5-1 win over his former club Cardiff City.

Spirits are high at Old Trafford ahead of Solskjaer’s first home game in charge with the former United striker bringing attacking football back for fans to enjoy and players to express themselves.

We already look a different team without José Mourinho in the hotseat, so hopefully we can get a run of results and good performances together before facing stronger opposition.

Solskjaer has made three changes to his team that beat Cardiff: Diogo Dalot for Ashley Young, Fred for Ander Herrera and Juan Mata for Anthony Martial.

As the team sheet shows below, as per Manchester United official Twitter account, Martial doesn’t even get a place on the bench. We suspect Solskjaer will offer a reason for that when quizzed.

A bit of a setback perhaps, but Mata is more than capable of causing Huddersfield damage. His creativity with Jesse Lingard and Paul Pogba will be key for Marcus Rashford.

Angel Gomes makes the bench while Romelu Lukaku and Alexis Sanchez have yet to return.

The #MUFC team news is in for #MUNHUD!