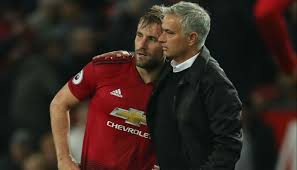 Luke Shaw believes José Mourinho should be respected for the job he did at Manchester United.

Mourinho’s two-and-a-half year reign at Old Trafford came to an end when he was dismissed by Ed Woodward on Tuesday, following United’s terrible start to the season.

The Reds dropped to sixth in the Premier League, playing abysmal football, had gone so far back that objectives could not be met, even at the halfway point for the season.

However, Mourinho has been a big influence on Shaw at times during his time in the United hotseat, but the defender says people shouldn’t stick their noses up at what Mourinho achieved at the club.

“It’s not very nice when something as big as that (Mourinho’s dismissal) happens at the club, but I think we all, as players and as a team, show respect in what happened,” Shaw said, as quoted by Sky Sports.

“People might be quick to forget what Jose did for United – the three trophies he won – he did a lot.

“One of the trophies (Europa League) was one we had not won before, and he took us to three trophies in one season.

“So those people need to respect him and remember what he did, not only us as a team to win those trophies but the fans as well.”

United were back in business on Saturday for Solskjaer’s first match in charge, against Cardiff. A 5-1 win saw United score five goals for the first time in a league match since the Sir Alex Ferguson era.

The Norwegian couldn’t have asked for a better start.

And, he has a nice run of games coming up to really get his feet off the ground.

Shaw has progressed massively under Mourinho but be under no impression it was an easy ride. The player had to change his ways and come back more determined to prove himself to the former manager.

Under Solskjaer, it’s important that Shaw keeps performing at a high level and progressing, although he was one of Mourinho’s most consistent players this season.