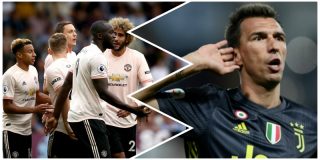 Unsettled Manchester United star Romelu Lukaku has attracted interest from Juventus on Christmas Eve. He has been strongly linked with a move to Turin since October when quotes from Lukaku reached The Independent and other outlets.

Not even the festive season can put a stop to the realisation silly season is just around the corner, with fresh reports suggesting Juventus are keeping tabs on Manchester United striker Lukaku.

The Belgian striker had a good debut campaign, netting 16 Premier League goals, as per WhoScored, but this season he has struggled to replicate that form. He has 6 league goals from 12 appearances so far this season.

According to Italian source, Calciomercato, Juventus believe the 25-year-old could replace Mario Mandzukic.

Lukaku missed Ole Gunnar Solskjaer’s first game in charge at the weekend over Cardiff City after taking compassionate leave, as reported by The Sun. But this time United didn’t struggle to score as they beat the Bluebirds 5-1 away from home.

It remains to be seen whether Lukaku will return before the end of United’s hectic festive schedule.

Even though Solskjaer already has quality options available, he will want Lukaku and Alexis Sanchez back in action as soon as possible. Anthony Martial and Marcus Rashford both scored at the weekend and Jesse Lingard picked up a brace.

The Norwegian boss looks set to make this a free-scoring United side.