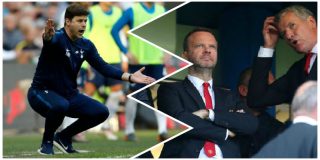 Garth Crooks’ team of the week column for BBC Sport makes for interesting reading this week. Not only because it features a Manchester United player, but he puts forward a new name for the managerial vacancy that doesn’t involve the tipped Mauricio Pochettino.

United are looking to appoint a new permanent manager at the end of the season after sacking José Mourinho, with Ole Gunnar Solskjaer given the job on an interim basis.

The Times have reported on United’s interest in Pochettino but Crooks, formerly of Spurs, believes Wolves boss Nuno Santo should be considered as an alternative.

He told BBC Sport: “Spurs fans would be incandescent with rage should Mauricio Pochettino become the latest manager to find residency at the Lowry Hotel. Yet the rumours of interest by United in the Argentine have been too intense to be total fantasy.

“I wouldn’t rule out Nuno Espirito Santo. The Wolverhampton Wanderers manager is the most exciting coach I have seen since Marco Silva burst onto the scene.”

Crooks also praised Paul Pogba for his performance against Cardiff City, with the Reds beating the Bluebirds 5-1.

He said: “This is the Manchester United we know and love. I said last week in the Crooks of the Matter that my issues with former United boss Jose Mourinho were not personal, but it is now very clear that Mourinho’s issues with Paul Pogba were.

“I can’t remember a team that looked so relieved by the departure of a manager, or supporters more jubilant. Pogba’s presence appeared to be the inspiration for United’s victory over Cardiff. As for United fans… they’ve got their ‘football’ club back.”

Nice words but without trying to get too giddy after Cardiff’s game, I’m beginning to wonder what we can expect by the time May comes around this season?

Pogba was a lot better with freedom given to United players on the pitch. The Frenchman bossed the midfield and expressed themselves through creativity, while adding to his tally of assists for the season.

You often see a rise in performance when a manager is replaced. Footballers want to prove they can be regulars and in this system there should be some competition for attacking roles.

Time till tell but Saturday’s win over Cardiff was very encouraging.