The Reds look to make it two wins on the bounce under Ole Gunnar Solskjaer as they host Huddersfield on Boxing Day.

Unfortunately, the game is not being televised so hopefully you and your mates will be at Old Trafford regardless, to give the new manager an ovation he deserves.

Solskjaer clearly wants to give something back to the fans with the way he approaches football matches and that is why I’m excited about the rest of the season. You could say the past week has brought a buzz to the place.

There will be changes to in defence as Solskjaer will be eager to have players compete for places but from the thrashing over Cardiff, it would be understandable if he didn’t want to mix it up too much. There is a lot of games coming our way over the festive season.

David de Gea, Luke Shaw and Victor Lindelof should all remain. At right-back, Solskjaer may be eager to see young Diogo Dalot in action and Eric Bailly, United’s best defender, should be given more starts at centre-back.

In midfield there are many players crying out for minutes on the pitch and Saturday’s performance should put off Solskjaer for making any drastic changes. Paul Pogba bossed it and got in on the act with some assists, Ander Herrera worked his socks off and contributed wonderfully with a long range deflected screamer, while Nemanja Matic surprised many fans with a matured professional display.

Jesse Lingard is a key figure in this season. The England international will keep his place in the team after scoring a brace and is likely to be accompanied by compatriot Marcus Rashford and Anthony Martial. 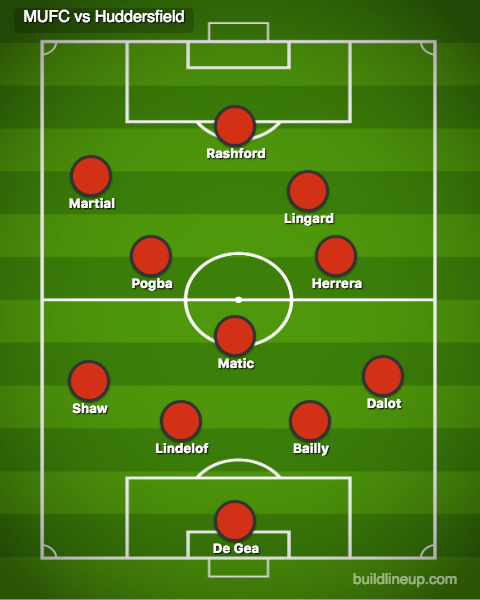 Let us know if you agree with our predicted XI to face Huddersfield on Wednesday.