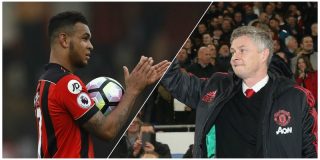 Joshua King, the Norwegian with the most English-sounding name ever, could soon be part of a Scandinavian SAS at Manchester United.

King, now at Bournemouth, played under compatriot Ole Gunnar Solskjaer in our reserve team and United’s new interim manager is reportedly interested in bringing him back to where it all began.

Solskjaer is known to be a big fan of this 26-year-old fellow countryman. King started his career at Old Trafford and played for Solskjaer’s second string side – with Jesse Lingard and Paul Pogba as teammates – before the two went their separate ways in 2010. The young forward was participating in the former United striker’s summer school in 2007 when scouts watched him. He signed for the Manchester side as soon as he turned 16 in January 2008 with Solskjaer playing a part to bring him to Old Trafford.

Despite the fact the striker has gone on to notch an impressively consistent career for himself at Premier League level down on the south coast for Eddie Howe, his time at United promised much but failed to come to fruition.

King’s pace, strength and natural finishing ability made him an instant success at youth level, scoring four goals in four games for the United U17s. Eight goals in 16 appearances for United’s reserves continued that trend, but a first team breakthrough was not forthcoming.

According to WhoScored, King played five minutes in a Champions League tie in 2012. We’ve found out that he did indeed come on for Danny Welbeck in the closing stages of United’s 1-0 defeat away to Galatasaray in the group stages of the tournament on 20 November 2012. It was King’s solitary appearance for the senior team although he did make the bench for FA Cup ties against Arsenal and Crawley. This was United’s understrength team sheet on the night that saw King of Norway – quite literally – get his five minutes of fame. Nick Powell, Scott Wootton, Marnick Vermijl and Larnell Cole. A throwback to United’s forgotten generation.

Since then, King has had a number of lower league loan moves until he signed for Bournemouth in 2015 ahead of their debut top flight term.

United had struggled for goals all season until Solskjaer masterminded an emphatic 5-1 victory over Cardiff in his first game in charge.

However, they remain short of options in attack, with Romelu Lukaku and Alexis Sanchez both struggling for form and fitness.

King has been an integral part of the south coast side’s rise to prominence under Eddie Howe, but according to The Sun, Solskjaer will be given a £50 transfer kitty and is plotting to use half of that on his former pupil in January.

With Solskjaer searching for a top four finish against the odds, his compatriot could provide the perfect addition to the squad as cover for Marcus Rashford and Lukaku. However, as a first team regular at the Vitality Stadium, the former United man would likely be forced to the fringes on the Reds bench.

King has scored five Premier League goals for Bournemouth this season and was their leading marksman two campaigns ago when he netted 16 in 2016-17 . Only Anthony Martial (eight) and Lukaku (six) have hit more for United since the start of the season.

His United career was over before it even really began, but if King does rejoin the Reds and rekindles the magic of those fledgling beginnings, a touch of Nordic nuance could be all that’s needed to spur United on to greater heights.