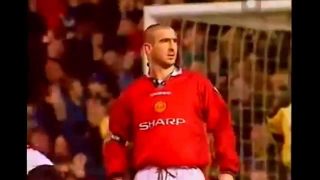 There is a feel good spirit back at Old Trafford with Ole Gunnar Solskjaer in place as interim manager.

To further that good feeling, however long it will last, we take a look at a memorable goal scored by Manchester United legend Eric Cantona against Sunderland, 22-years-ago later.

The year was 1996 and the goal will forever be seen as an iconic one, with Cantona elegantly chipping the goalkeeper.

An iconic goal met with an iconic celebration, it really is no wonder Cantona is deemed a catalyst at Old Trafford.

Cantona’s transfer to Old Trafford from Leeds made the history books not only for being controversial, but the Frenchman signed for the club in November 1992 and helped Sir Alex Ferguson’s team win the inaugural Premier League title later that season.

Hopefully, it can be replicated on Saturday against Solskjaer’s former club Cardiff City, who he managed and saw relegated to the Championship in 2014. The Norwegian was sacked while they were in the lower tier of English football for failing to build on form.