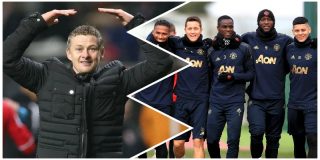 Another busy day awaits Ole Gunnar Solskjaer at Carrington training ground. This morning he meets the external media for the first time as interim boss of Manchester United and takes training for a second time with his new bunch of players.

In an interview with MUTV, Solskjaer made it clear his new appointment made him feel as though he was coming home.

And, the Norwegian already looks set to make some big changes around the training complex.

The Sun believes the newly-appointed caretaker manager is ready to shake things up by re-introducing a tradition lost under José Mourinho’s time at the club in attempt to change how the players eat at the Carrington training ground.

Solskjaer wants his players to eat together at the canteen – a tradition he became used to during his time under Sir Alex Ferguson at Manchester United.

This is an apparent effort to get rid of any cliques formed within the team and to have everyone on the same page again. Each player will be given a clean slate under Solskjaer and will be allowed to prove themselves as United players.

We can only see this as a positive going forward, with Solskjaer’s main job over the next six months to unify the United dressing room. Nobody is saying it will be easy but the Baby-Faced Assassin is making early moves.