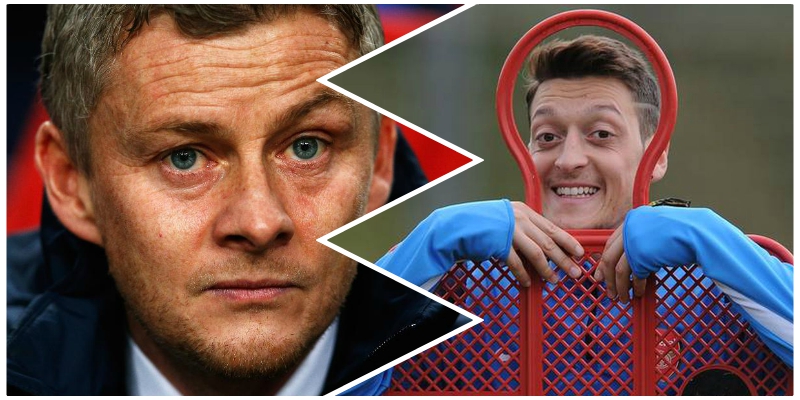 The German has failed to nail down a consistent place in Unai Emery’s evolving side, and has become unsettled in north London. Ozil would have perhaps liked the idea of linking up with his former Real Madrid manager José Mourinho at Old Trafford, but with the Portuguese being sacked, he could become Ole Gunnar Solskjaer’s first signing at Manchester United. Also according to The Star, Solskjaer will be given a £50m transfer kitty in January, which looks to be enough to try and prize the out-of-favour Ozil away from Arsenal.

Mourinho preferred older players who could provide instant reward and renumeration, rather than building a team of younger players for the future. Ozil, 30, would have fitted this blueprint to a ‘T’ for Jose, but Solskjaer will want to mould a United side in his own image. It remains unclear if the ex Germany international will fit into our caretaker manager’s plans.

He’s started only one match since mid-November, a dead rubber Europa League tie against Qarabag last week. He watched helplessly from the stands as bitter rivals Spurs swept Arsenal aside to reach the Carabao Cup semi-finals in midweek, only continuing to fuel the speculation linking Ozil to Old Trafford.

Lauded by Arsenal fans as a world class player, there has been little evidence that he lives up to this hype. Ozil has a tendency to drift in and out of games and often goes missing when it matters. So do United need him? The Arsenal number ten dovetailed superbly with Alexis Sanchez during their time in tandem at the Emirates, sparking excitement that Ozil’s potential move could help the Chilean rediscover his best form following a catastrophic 12 months since swapping London for Manchester.

But I don’t believe we need him. It looks a case of too many cooks spoiling United’s broth. Jesse Lingard, Juan Mata, Sanchez, Paul Pogba, Marcus Rashford and Anthony Martial have all been utilised in the number ten/CAM position, the same as Ozil.

A deep lying, box to box player, a right winger, centre back and right back should be our priority when it comes to transfers. It’s no secret that Man Utd’s recruitment policy has been scattergun at best and erratic at worst. Too often, we’ve jumped on the first player available rather than having any discernible recuitment strategy in place. Signing Ozil would only continue that trend.

We’ve made an unhealthy habit of signing big name players just for the sake of it – look no further than Sanchez and Pogba as proof of that. It has become our club’s transfer raison d’etre to target the X Factor name, the luxury player and the mercenary ahead of people we actually need to strengthen the team in key areas. We’ve already got a team of slackers so signing a player with a notoriously poor work-rate like Ozil is something we should avoid.

There’s no room in this United side to accommodate someone who only comes to the party when the mood takes him. For me, it’s a “No No” and would epitomise our lack of direction on and off the field.