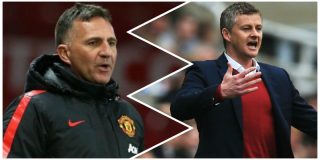 Melbourne City coach Warren Joyce, who worked with Ole Gunnar Solskjaer at Manchester United, says he has no doubts that the Norwegian will handle the Old Trafford hotseat.

The former Manchester United reserve team coach is not letting Solskjaer’s terrible spell at Cardiff City in 2014 get in the way of this fresh opportunity. Either way, it’s not the fairest criticism to throw at Solskjaer and everyone should allow him get on with this job as a fresh start.

Joyce worked with Solskjaer when he was beginning life as a football coach around Carrington. He speaks highly of him in an interview with The Age, describing the former Molde coach as ‘an absolute diamond of a bloke.’

“He came with me at the start of it, we were working together in the reserves, and he had come straight from playing,” Joyce recalls.

“As a man, when you know him inside out and you know how he prepared, even though he wasn’t playing [he left no stone unturned].

“What he did, coming back to training grounds training late, to make sure he was ready for the next game, ready so he could do everything he possible could to be right.

“It’s not a fluke that he gets on late in the Champions League final and scores the winner.”

So, there’s praise for Solskjaer’s worth ethic in and around the club. I don’t think he would have been given the caretaker’s position had he not previously proved a willingness to work beyond borders. To go that extra mile.

“Forget as a coach or anything, he is exactly the right type of person,” Joyce continued.

“If you say there is a Man United-type of serial winner, he is that type.

The highest praise you could give Solskjaer, right there, from a man who has previously worked with him at United.

It could go wrong but it also gives everyone a chance to enjoy football again knowing United will set up again to attack teams rather than play with an outdated conservative style.