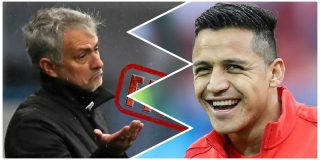 Placing bets at the manager’s expense and being boastful about it the week José Mourinho is dismissed? If there’s truth to this story, quite a few players need to be put aside and told that behaviour is totally unacceptable from professionals.

According to The Sun, Aleixs Sanchez sent a message into the United player’s group chat celebrating the fact Mourinho had been sacked whilst also bragging about the fact Marcos Rojo now owed him £20,000.

The report claims to know exactly what message Sanchez too: ‘I told you so!! Patience is all it takes. Rojo you owe me £20k.’

This is the second disrespectful incident to happen after Mourinho got the axe at United this week. The Sun also claimed that World Cup-winner Paul Pogba led the celebrations saying: “He thought he could make a fool of me and turn the fans against me. He f***ed with the wrong baller.”

While it is a relief to hear coach Michael Carrick allegedly stood in with a no-nonsense message to remind Pogba and other players that no player or manager is bigger than the club, more needs to be done to sort of few of these lads out in the dressing room.

It’s unacceptable to be taking bets with fellow teammates on a United manager getting the sack if you’re a United player. At the end of the day, Mourinho lost his job and certainly would have liked to have left Old Trafford on a better note.

What makes it worse is Sanchez has been a flop since arriving at United a little over a year ago, and he of all people needs to get himself back training and fit to prove his worth under caretaker manager Ole Gunnar Solskjaer.

The Sun also claims Sanchez is earning a staggering £505,000-a-week at United. It’s good to see the money is going to good use…