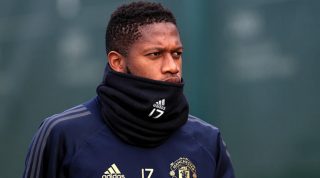 Former Arsenal midfielder Gilberto Silva represents Fred and has insisted that the Brazil international is committed to Manchester United despite the slow start to his Old Trafford career.

Fred was hardly given a chance to prove his worth under José Mourinho, who was in charge when the midfielder joined United for £52 million, as per The Telegraph. He has only made eight appearances in the Premier League since his summer switch.

The player’s personal advisor, Silva, acknowledges that the lack of game time at United this season has made Fred anxious, though he is not ready to call time and move on just yet.

Of course, with Ole Gunnar Solskjaer now in charge as interim boss and plans to appoint a new full-time manager at the end of the season, Fred should see this as an opportunity to prove himself and get his name on the team sheet.

It became frustrating for fans too, seeing a new signing who cost a fortune just sit on the bench in big games he should have been signed to make a difference in…

“The fact that he is not playing makes him anxious, but what I say to him is that he must keep working hard on a daily basis, he should be patient because the club is going through a delicate moment,” Silva told The Telegraph.

“Many things have happened to him in six months. A new lifestyle, a different league and a historic club with the grandeur of United that are going under a lot of pressure. Perhaps this pressure impacts on him as well. In spite all of that, he sees everything as a learning process.

“But there is no chance of him leaving United. He has a five-year contract. Obviously when you don’t play too much it is worrying because you want to show your quality.”

Mourinho conceded earlier this month that he felt he could not trust playing Fred, as per the Daily Mail, with the view his team needed to improve defensively in order to cover for the Brazilian.

However, the Portuguese tactician was sacked on Tuesday morning and Solskjaer will take charge of his first match as United manager on Saturday, away to his former club Cardiff City.

It’s been a bad season for United; positioned sixth in the league, out of the Carabao Cup and an unconvincing performance against Valencia in the UEFA Champions League saw the Reds finish runners-up in Group H, missing out on a golden opportunity to top the group and avoid difficult opposition such as Paris Saint-Germain.

Fred will be hoping to get a start against the Bluebirds this weekend.