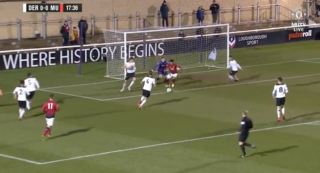 Can the rams of Derby County bounce back to prevent a run of three defeats after Nishan Burkart opened the scoring for Manchester United’s U23s?

The U23s have performed convincingly with Angel Gomes playing a crucial role in the goal that separates the two sides at half-time.

Gomes went on a driving run through midfield, casually drifting through the channels, before cleverly squaring the ball across the box.

Luckily for United, Burkart was able to pick up the low cross and finish exceptionally with his back to goal.

Irishman Lee O’Connor has performed terrifically at full-back. We’re not suggesting there is bias for Irishmen but being one, it would be nice to have another young Irish player with a chance of making it.

These sides are not known for scoring many or conceding many either, so we’re not expecting many goals in the second-half. Let’s hope United can keep their lead and win.