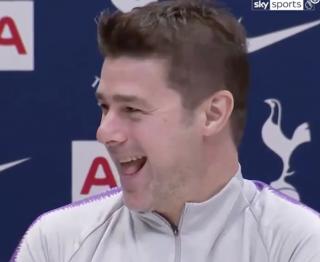 Let people speculate. Tottenham are not happy to have their press conferences dominated by Manchester United’s hunt for a permanent manager, with Mauricio Pochettino widely tipped to be the No. 1 candidate.

Sky Sports News reporter Dharmesh Sheth was unable to ask Pochettino about the ongoing links to the United job. The Spurs press conference wasn’t having any of it and while the two bickered over the topic, the Argentine coach was gleaming with an excited facial expression.

It must be difficult to contain yourself when the biggest football club in the world wants you to become their manager, though we fully expect Pochettino to respect his employers at all times. He’s never been the type to do otherwise.

And, these are going to be challenging times for Spurs. They’ve been brilliant again this season despite not spending any money, but we’ll have to wait and see how United’s search for a new permanent manager affects their current players, with a growing feeling that Pochettino will be on the move.

Watch the video below as Sky Sports reporter has questioned rejected by the Spurs press officer. They even ask for the cameras to be turned off at the end.

“We will not have another press conference dominated by Man Utd talk” @SkySportsNews reporter unable to ask Mauricio Pochettino about links to Manchester United job.