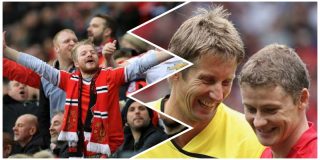 The former Netherlands goalkeeper, who won the UEFA Champions League on penalties with United in 2008, is hoping this could be a turning point for our season with “more smiles and better results.”

Though our season has turned to dead rubber after sacking José Mourinho, and Solskjaer now has a free hit for six months at the biggest football club in the world.

Smiles and results became rare under Mourinho, especially in his third season in charge, and United felt he could no longer continue in his role as manager. The Portuguese tactician was axed on Tuesday morning.

The Norwegian doesn’t have experience at this level and it may be too big of a step, but nobody can blame Solskjaer for accepting the role. It’s a once in a lifetime opportunity.

However, it’s nice to see he has the backing of some former players.

Van der Sar is a highly respected figure in football now, acting as a successful director at Ajax, who are back in the Champions League knockout stages this season.