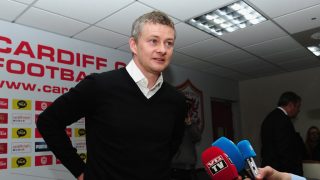 Manchester United enter a new era on Saturday with caretaker manager Ole Gunnar Solskjaer in charge of the Reds. A trip to his former club Cardiff City will see the Norwegian coach take charge for the first time following the sacking of José Mourinho.

Mourinho was given the sack by Ed Woodward in a face-to-face exchange at Carrington before the squad was informed he would no longer be manager. The poor results, standard of performance and dire dressing room environment left the Glazers with no other choice but to pull the plug.

For instance, being outclassed by Liverpool – home or away – should never be tolerated at United. Our Anfield performance was pathetic and Mourinho had to go. Solskjaer’s job now is not to win the league or even get top four, it is to unify the dressing room and bring some festive cheer to those who had enough of Mourinho’s dour demeanour.

Cardiff have won two of their last five games to climb out of the relegation zone and their fans will be up for it after witnessing a bad period under Solskjaer in 2014. And, the last time United visited the Cardiff City Stadium, November 2013, United were held to a 2-2 draw. We will be hoping for a better result this time around.

Life back in the Premier League hasn’t gone too easy for Cardiff, however, the Bluebirds have improved of late. They recorded an impressive 2-1 win over Wolves at the end of November and will be aiming for another upset this weekend.

Currently positioned 16th, Cardiff are just two points above the drop zone but they do have a player worth keeping an eye out for in Junior Hoilett. Neil Warnock’s first signing at the club, joining in October 2016, is attracting lots of attention for his displays on the wing.

The last time Cardiff were a Premier League side, it was Solskjaer who eventually saw them relegated. Nearly nine months after taking charge, he was sacked after a shocking start to their Championship return and many at the Welsh club believe Warnock is still in the process of cleaning the mess Solskjaer left.

Solskjaer hasn’t got many positive memories from his time at Cardiff City, but he will hope to lift his reputation as a football manager in the next six months at his beloved Manchester United.

Victor Lindelof returned to the starting line-up for the defeat at Anfield and should be in better condition this week, while Anthony Martial also made a comeback from injury albeit as a substitute last weekend.

It remains to be seen whether Chris Smalling is fit after injuring his foot in the warm-up and we’re still waiting on Luke Shaw, who has been out of action since the start of December.

While it will be difficult to predict Solskjaer’s first starting team as United manager, at least we can get back to enjoying football again.