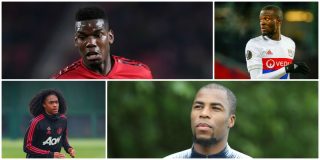 Jose Mourinho has been sacked and replaced by club legend Ole Gunnar Solskjaer in an unpredictable swap. The hope is that the Solskjaer era will allow Manchester United to restructure and prepare for a new era.

One area that faced heavy scrutiny under Mourinho, both by the manager and in the media, is the current squad, which needs a clear and massive overhaul to reach the top of English football again. Here’s every single United player and where they currently stand.

David de Gea- A player who would have been available for free transfer in the upcoming summer had United not triggered a one-year extension in his contract, as reported by The Mirror, de Gea is not one the United board will want to risk losing.

Sergio Romero and Lee Grant- Neither of the two reserve goalkeepers have done anything to warrant being sold, but there are plenty of young goalkeepers at United who will eventually challenge for the backup slot.

Diogo Dalot- 19-year-old Dalot has proven the reason for his signing in his few appearances so far, defending well for the most part and perhaps only lacking the confidence to really exert his influence on matches. He should feature frequently under Solskjaer.

Luke Shaw- Improving this season after an unsteady first two under Mourinho, Shaw now can cement his place in the United side for the years to come. He isn’t perfect, but what he has done is likely enough to keep him as the Red Devils’ starting fullback for the rest of the season.

Ashley Young- Young performed well on occasion under Mourinho and did well in the World Cup, which should secure his place in the squad for a while yet, but long gone are the days where he starts for United.

Matteo Darmian- The fact that he has not played consistently since 2017 and failed to get his requested move away from the club last summer must be frustrating, but until new full-backs are signed, he will likely have a chance to impress.

Antonio Valencia- The club captain has barely featured this season, which he implied was due to poor fitness and form, as per Bleacher Report. At 33, Valencia, who is being outplayed by ageing former winger Ashley Young, shows no promise of contributing to the club in the future.

Victor Lindelof- Lindelof stepped up in the last few months, winning the club’s player of the month award for November after assertions that he would never make it at the club. It is unclear whether he will ever be United’s starting centre-back, but he should be a part of the squad.

Eric Bailly- The promise which surrounded Bailly’s debut season at United faded away, perhaps due to persistent injuries and relationship troubles with Mourinho. Solskjaer must ensure Bailly steps up and proves the popular belief that he is United’s best defender.

Chris Smalling- The decision to award Smalling a new contract was berated by many United fans, and it doesn’t seem like he will last the length of his new deal. A plethora of academy defenders trail Bailly and Lindelof, and with a new centre-back joining next summer, Smalling will struggle to find a place.

Marcos Rojo- Looking solid in Mourinho’s first season, Rojo has since not featured, but he was awarded a new contract this season. He seems rash and inconsistent at the back, but his contract allows him to compete with Smalling for the final place at the back.

Phil Jones- Jones, at one point, seemed to be the best defender at the club, but he has fallen off a cliff ever since, costing United in high-profile fixtures and falling to the bench despite having fewer fitness problems than before. It seems highly unlikely that he will last at the club.

Ander Herrera- Dropping off a cliff in form since his authoritative 2016/17 campaign, Solskjaer should give Herrera the opportunity to showcase his true colours once again. He does have quality, but at 29, he needs either Starting XI ability or a tactical role to earn the new contract that Bleacher Report claims he wants.

Juan Mata- Despite showing better form centrally than out wide, Juan Mata could still play either position in Solskjaer’s preferred 4-3-3. He improves United as a side overall, but, much like Herrera, will need to improve his individual displays to earn a new contract.

Fred- Signed from Shakhtar Donetsk after thoroughly impressing in Europe last season, Fred has barely featured for United since. Hopefully his acclimatisation to the Premier League, which was already underway, will continue under a new manager.

Paul Pogba- Inconsistent this season after his excellent displays at the World Cup, Pogba now must prove that Mourinho was the problem instead of his perceived indiscipline. Whether he obliges, becoming a leader in the side, or not, remains to be seen.

Marouane Fellaini- The problem with having Fellaini over the course of a season is the obligation to start him in matches. He is excellent for Belgium when no such obligation exists, because he can contribute to any side, but if he wants to be a starter, he should leave.

Scott McTominay and Andreas Pereira- Both young midfielders’ abilities have been viewed under tinted glasses under Mourinho, and now, their true colours will be seen.

McTominay, at best, is a safe midfielder who executes defensive roles and can complete short passes in tight spaces. Pereira is a flair-oriented midfielder who seems to be Pogba’s best potential understudy at United. Both could have roles at the club, but they remain unclear and their qualities remain under question.

Anthony Martial- He has shown this season once again that he is a massive part of the future and should be the only guaranteed starter in United’s front-line under a new manager.

Romelu Lukaku- This season has been abysmal from the Belgian, but watching his debut season, his Everton stint, and his 2018 World Cup campaign, this is not the norm for Lukaku. Whether he can become United’s main striker for years to come or plays as an impact sub or rotational player is yet to be determined, but his intelligence and ability to score goals in the Premier League is undeniable.

Alexis Sanchez- The most likely player to challenge Romelu Lukaku for a starting striker is Alexis Sanchez, who struggled under Mourinho but will be relishing one final chance to get it right at Old Trafford. Sanchez may also play on the right-wing given United’s yearning for players in that position.

Marcus Rashford- Struggling under Mourinho because his system strictly used a target man (United haven’t had a target man since Zlatan Ibrahimovic), Rashford still managed to occasionally prove that he will be an asset to United for years to come, whether as a rotational striker or off the left-wing.

Jesse Lingard- He will never be a starter for Manchester United, but Lingard’s ability and place in the squad is not under question.

Initially, Valencia and Jones should depart with either Darmian or Young, and either Smalling or Rojo Following them out should be two or three of Matic, Fellaini, McTominay, Pereira, Herrera, Mata and Sanchez.

Tuanzebe and Fosu-Mensah scrape the surface of United youth who should become a part of the squad in the next few seasons, with names such as Tahith Chong, Angel Gomes and Mason Greenwood most heavily touted, but additions will be needed nonetheless.

It seems more likely that a right-back could join United than a left-back given that Young and Darmian seem to both prefer the left side, and one in their prime is the likely solution. Djibril Sidibe’s form, much like the rest of his Monaco side, has been very poor, but he can play his preferred right-back along with the opposing fullback position, and if he rediscovers his form, could be an asset.

Touted in the summer were Premier League centre-backs Toby Alderweireld and Harry Maguire, but it seems now that United’s attention has shifted towards Napoli’s Kalidou Koulibaly, according to SportsKeeda. Koulibaly seems to be the preferred target for his reputation and experience, but it may take over £100 million to convince the Italian giants to sell, and Koulibaly is playing for a superior side to United, making Maguire more likely.

The Mirror reports that United have been watching young deep-lying playmaker Tanguy Ndombele of Lyon, who would be a great addition. With him could be Leicester’s Wilfred Ndidi, a young destroyer at the top of Premier League football. He has seldom been linked but posts 7.9 defensive actions per 90 minutes in England’s top-flight for Leicester and would slot straight into United’s side [WhoScored].

Finally, United will rue the decision not to move for Spurs’ Lucas Moura and Manchester City’s Riyad Mahrez, both of whom are excelling at England’s two top clubs playing right-wing. Instead they may approach Douglas Costa of Juventus, as reported by Fox Sports, and at 28, he would add experience and flair to United’s right-wing without interfering with United’s youth players.