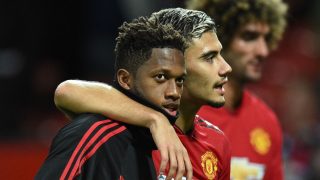 Andreas Pereira failed to make the impact he wished to under José Mourinho.

The Brazil international had a brief run in the team at the beginning of the season but suddenly slipped down Mourinho’s pecking order at the club. Pereira is now being linked with a move to Santos.

The club’s president, Carlos Peres, spoke to A Tribuna, quoted by Manchester Evening News: “He [Andreas Pereira] is a player that interests us a lot. He is a santista and wants to play for Santos.

“The family is trying. His father wants to see him at Santos for at least a year. The problem is that Manchester are playing hard. We know the end of the contract is in the middle of the year, but we want the player now.

“With his father, I’ve been speaking, but we have not yet entered into the details of values.”

READ MORE: Solskjaer to get £50m transfer kitty in January as Man Utd look to unify and save season

Much of Pereira’s recent career has been engineered by his father. It’s hardly a surprise to hear former representatives of his didn’t feel the need to work with the player anymore and no longer do…

Mourinho was left feeling ‘disappointed’ in 2017 when Pereira made the decision to join Valencia on loan, as per Irish Times. He wanted the midfielder to stay at Old Trafford and fight for his place.

In hindsight people will say he made the right decision to go back to Spain for first-team football – something he hasn’t had a lot of this season – but going against your manager’s wishes can have consequences, and sources close to Carrington told Stretty News that Pereira’s character came under question.

Let’s see what happens with Pereira in January.