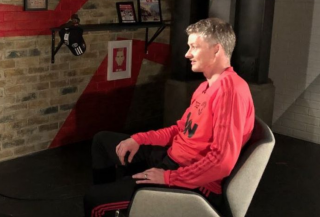 Ole Gunnar Solskjaer has given his first interview as a Manchester United player to MUTV’s Stewart Gardner.

“It feels like coming home,” will be the most iconic line to come from the interview with Solskjaer buzzing to be back at Old Trafford.

“It’s six months,” Solskjaer is quoted by the Manchester Evening News, who have a full transcript of the interview. “I’m back home. I’m going to be myself. The club is running a process to find the next manager so I’m going to be myself in the meantime with Mick, Kieran and Michael. We’ll get the players enjoying their football again.”

Solskjaer reveals that he watches the Premier League so knows what to expect from each team, but makes it clear United won’t worry about the opposition and will play their own game, with the players going back to enjoying their football again. He wants to restore pride.

That was arguably the most important message from the interview. A sense of change from the dire demeanour fans have been subject to all season.

Coming in as Solskjaer’s assistant manager is Mike Phelan, a former player at the club and Sir Alex Ferguson’s right-hand man.

“That was the first thing I thought about,” Solskjaer added: “I’m young, Kieran and Michael are young. I rang him and he was at a coaching course in Burnley when I rang him. He’s an incredible calming influence. His football knowledge is really, really good.”

He was asked if he’s been keeping an eye on the club’s youth players.

“Being a manager in Norway that range of players I’ve been trying to get players on loan from Nicky Butt over to Molde. Kieran McKenna’s done a really good job with the under-18s and he’s really highly regarded. He’s a link between the academy and the first team and that’s crucial.

“Matt Busby said if you’re good enough, you’re old enough and I want to maintain that. I watched the Chelsea game and I was really impressed.”

Mason Greenwood scored a hat-trick in that game and has everyone excited with his progress this season. The 17-year-old will hope he can get some opportunities in the first-team under Solskjaer.

Speaking of giving players opportunities, Solskjaer revealed how he handed Jesse Lingard his debut in the reserves.

“I gave him his debut in the reserves away at Burnley. Within two minutes that little tiny kid goes in for a 50/50 with a massive centre back and the little kid absolutely clattered him. I thought you have a chance. He showed me he had something.”

On Rashford, the United interim boss says he has been following his career path from academy into first-team and is looking forward to working with the England international.

And, finally, he’s getting to know the rest of the lads in the first-team.

“I’ve spoken to most of them today. It seems like a great set of lads, professional, wanting to do well and learn. I’ve spoken to Michael and Kieran about them all. I’ll take time getting t know them.”

Solskjaer’s message to the fans: “It’s great to be back home. I promise I’ll give everything I’ve got to get this club back to success. I can’t wait to get going.”