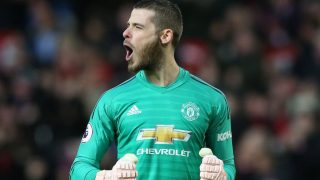 David de Gea seemingly prefers the idea of a long-term future at Manchester United than switching Old Trafford for Juventus or Paris Saint-Germain, according to the ever reliable Mark Ogden of ESPN.

The Spanish goalkeeper shares the same agent, Jorge Mendes, as former United manager José Mourinho, who was axed this week, though he still edges closer to committing his future to the club.

This will come as a huge boost to whoever is in line to become United’s next permanent manager. He will arrive at Old Trafford with the best goalkeeper in the world already in place.

But there remains a lot of work to do at Old Trafford after sacking Mourinho. United will look to appoint a new full-time boss and director of football when the current campaign ends, with Ole Gunnar Solskjaer standing in as interim boss.

Last month United triggered a one-year extension in De Gea’s contract to prevent him leaving on a Bosman next summer.

The aim now is to get De Gea to sign fresh terms that will tie him to the club until he’s well into his thirties, as expressed by ESPN.

It is also stated that United are aware of interest from Juventus and PSG.