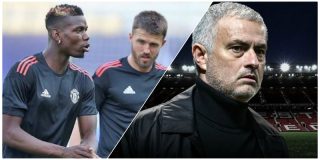 Michael Carrick never came across as a confrontational type as a player but he was able to put Paul Pogba back in his place this week when Paul Pogba inappropriately celebrated José Mourinho’s dismissal.

The Mirror understands the French World Cup-winner was high-fiving teammates when news of Mourinho’s sacking broke, and The Sun claims he was heard shouting: “He thought he could make a fool of me and turn the fans against me. He f***ed with the wrong baller.”

Carrick was not prepared to let this moment of petulance slip. And, to allow an influential figure like Pogba to dance on the manager’s grave wouldn’t set the right example for other players.

The following line from The Sun’s report hits the nail on the head and probably made Pogba feel the floor was swallowing him up: So, in astonishing scenes, Carrick, a Champions League winner in 2008, told the players that the club was bigger than any one player or any manager.

With Carrick’s quiet, almost shy tone, this message comes as a bit of a surprise. A pleasant one. Club sources made it no secret that Pogba had become hard work under Mourinho, with a degree of sympathy to the axed manager, and he cannot be given a free ride here.

Under caretaker manager, Ole Gunnar Solskjaer, Pogba will be playing under the Norwegian boss again. They know each other from the serves, so there’s a chance the former Cardiff manager won’t view the Frenchman like a super star, which had become an issue in the dressing room with Mourinho.

The Sun carefully state that Carrick’s message to Pogba did not dampen the heightened spirits in the dressing room with several players happy to see the back of the Portuguese tactician.

Not a nice thing to do and say, and certainly not Professional, even if he has wronged you.