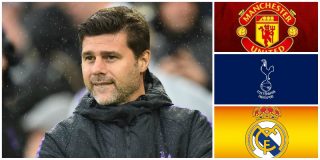 According to The Mirror, Manchester United’s first choice to replace José Mourinho as manager Mauricio Pochettino would be open to taking the job as Tottenham brace themselves for a fight to keep hold of the Argentine coach.

While it is widely expected that Pochettino will focus on the job at hand until the end of the season and respect his employers wishes throughout that period, there is a feeling he will accept a deal at Old Trafford if offered.

Interestingly, United may have more of a battle on their hands than trying to negotiate with Tottenham and club chairman Daniel Levy. Pochettino’s stock is rising with Spurs progressing in the Champions League and the club had already been bracing themselves for further interest in their boss from Spanish giants Real Madrid, as per The Guardian, despite Santiago Solari recently getting the job until 2021 after replacing Julen Lopetegui.

On Wednesday morning, Manchester United announced that former player Ole Gunnar Solskjaer would be interim boss for the remainder of the season after dismissing Mourinho 24 hours prior.

But that is the short-term solution to try and salvage something from United’s season, with the Reds currently positioned sixth in the Premier League and out of the League Cup. Solskjaer will take charge with plenty of time to prepare for the club’s Champions League last 16 ties with Paris Saint-Germain, so there’s still something to play for under the temporary boss.

Solskjaer is expected to return to Norway with his club Molde when his job at United concludes.

Meanwhile, the club will work towards securing a new permanent manager and a director of football for him to work with.

Pochettino plays an attractive attacking brand of football which appeals to United, as does his willingness to give youth a chance in the first-team. He ticks all the boxes.