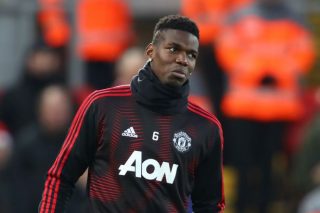 Mourinho, who didn’t see eye-to-eye with certain players in the Manchester United dressing room, was dismissed as manager with the club working towards appointing a permanent manager and director of football at the end of the season.

Rumours are doing the rounds now that the mood at Carrington changed on Tuesday following the news Mourinho had been axed.

According to The Mirror, Pogba high-fived teammates once they were told the news by executive vice-chairman Ed Woodward.

Pogba was left on the bench for the defeat at Liverpool on Sunday, which saw United’s chances of finishing in the top four this season stretched further.

The Mirror ran the following line in their report: The dressing room could not contain their relief at the Special One’s departure and one source said: “No-one wants to see anyone lose their job, but it was a completely different mood as players were happy again, smiling and could get on with training.

“The mood from one day to the next was like night and day.”

These things do tend to bug me, I’ll be honest, but only if the players fail to kick on now and prove that they were being held back by Mourinho. Otherwise they’re the ones who come out of this looking bad and that will anger supporters to no end.

Pogba was perhaps the biggest victim of Mourinho’s management. It has been hard watching him go from being a World Cup-winner to a nullified prima-donna.

It will be interesting to see if Mourinho’s axe changes the likelihood of Pogba leaving the club next summer.