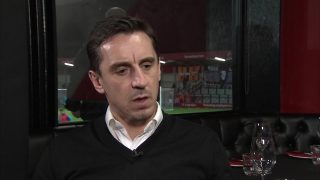 Unlike his former Manchester United teammate, Ole Gunnar Solskjaer, Gary Neville has no plans to return to Old Trafford in a coaching capacity.

Neville was speaking on Sky Sports’ debate last night when he expressed his love for what they’re doing at Salford in the National League. He ruled out any possibility of abandoning that project to jump ship for United, which wasn’t really being touted in the media anyway.

The former United defender joined Geoff Shreeves to discuss the structure of Manchester United itself, potential long-term successors to Mourinho and what’s in store for the club.

He made it clear at the beginning that someone losing their job is always sad. It’s not something to boast or celebrate, no matter what industry you are involved in, as Mourinho was dismissed by United on Tuesday.

“Absolutely not. I am not fit for purpose at that football club,” Neville told The Debate. “I own Salford, a non-league, National League club. I love what we are doing here.

“Absolutely no way in a million years, one would I ever get employed at Manchester United.

“And secondly should I be employed at Manchester United, maybe 15 or 20 years time if I go and prove myself as an incredible sporting director, which I am not planning to do.

“This needs to be the best in class, internationally. We have to take emotion out of it. ‘Get him back!’ No, get the best people, who have run the best clubs in the world and reset properly!”

Neville hits in the nail on the head, as per usual, here.

There would be question marks over whether or not we could see Neville working alongside Ed Woodward, though the club must change in that respect and have football people making football decisions.

Woodward is not cut out for making football decisions and mistakes will drag on the longer this continues.