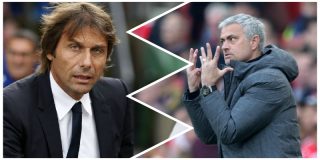 According to Matt Law of the Telegraph, Antonio Conte is interested in succeeding José Mourinho as Manchester United’s next permanent manager.

Conte won the Premier League in his first season at Chelsea, but fell out of favour at Stamford Bridge and was sacked this past summer despite winning the FA Cup, beating Mourinho’s United in the final.

The Telegraph believes Conte is interested in becoming the next United manager and claim he has spent the past six months living between his homeland Italy and England, with his daughter still in school in London.

Perhaps he’d feel it would be getting one up on his old rival José, or Conte simply wants the biggest job in football, but this won’t go down too well with United fans. The club shouldn’t be appointing another Chelsea reject after Mourinho’s failure.

Moreover, Conte’s football isn’t very attack-minded and that’s exactly what United are looking for in their next manager. He may have had a better working relationship with Paul Pogba during their time at Juventus, though the Frenchman should have no bearing on who gets the job next. It’s not as if his future is set in stone at Old Trafford either.

Here’s a line from the Telegraph’s report we agreed with: United may well be wary of Conte’s volatile reputation, however, and the accusation that he plays unattractive football.

Conte, however, will argue he gets the best out of his players. The Italian certainly did when he led Chelsea to their last Premier League title and people still highly rate him at Stamford Bridge.

He also has experience working with a director of football from spells at Juventus and Chelsea – a new model set to be introduced by Manchester United.