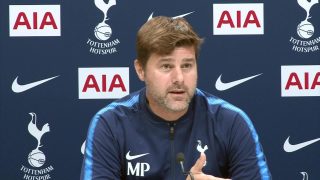 Tottenham Hotspur manager Mauricio Pochettino was asked if he would be the perfect fit to replace Jose Mourinho at Manchester United.

He spoke to the press on Tuesday morning – ahead of Tottenham’s Carabao Cup clash against North London rivals Arsenal – and came across sensitive after news came through about a fellow Premier League manager losing his job.

Like in any field of employment, you will not see people glee over the dismissal of a colleague. Football is a cut-throat business and Pochettino is aware the same could one day happen to him.

READ MORE: Man Utd need to be aggressive from top to bottom; no more half measures

Of course, there are calls to make the Argentine coach Mourinho’s successor at Old Trafford, though Pochettino sees that as only a rumour for now.

A reporter asked the Spurs boss if he’d be the perfect fit for the United job to which he responded, as quoted by the Manchester Evening News: “I think there are a lot of rumours about my position as manager at Tottenham. I cannot answer this type of question. Of course always I respect a lot the opinion of everyone. The business you know very well, a lot of rumours happen. I’m so focussed in trying to deliver my best in this football club.”

Pochettino is not in a position to answer this question as current Spurs manager. We’re at the halfway point of the season with lots of football to play and he will want to rally his players on towards their objectives.

Never once has Pochettino hinted at the United job, but sources close to Stretty News understand the club are certainly considering him as a full-time solution.

“Hello, Pochettino speaking. How may I help you?”

Woodward: “My identity does not need revealing. Get the first flight to Manchester, we need to talk.” pic.twitter.com/u3ggMDRErk