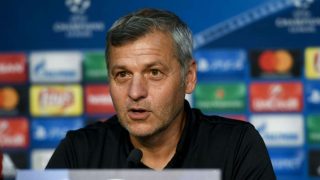 Lyon manager Bruno Genesio could be line to replace Jose Mourinho as Manchester United manager after the Portuguese tactician was dismissed early on Tuesday morning.

According to Charly M. (@SeriousCharly), a verified Twitter user who describes himself as an influencer of Parisian stands and a Lyon supporter, Genesio is currently on his way to England for talks, as per Le Libero Lyon.

🔴 Breaking : Lyon’s manager Bruno Genesio could replace Jose Mourinho at Manchester United. The Frenchman is currently on his way to England to finalize the deal, league sources tell Libero Lyon.

Of course, United won’t make a definite decision on this too soon and will evaluate their options, but Genesio is not a name that has been previously linked with the job.

Lyon are currently third in Ligue 1 and finished runners-up to Manchester City in their UEFA Champions League group, so he’s a manager that is currently getting the most out of his players, including Memphis Depay, formerly of United.

Rafael Da Silva could also tell him how amazing Manchester is, eh? But less so when Ed Woodward is knocking around…

Anyhow, it is best to take this rumour with a pinch of salt as anyone on Twitter can make up a lie in a cry for attention.

Let’s wait and see how this plays out throughout the week.