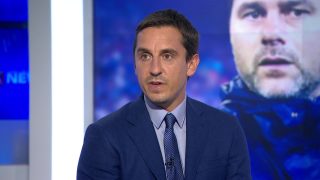 When you walk around Old Trafford and ask people who they’d like to be the next Manchester United manager, Tottenham boss Mauricio Pochettino is a popular choice.

Now Gary Neville believes the Argentine coach should replace Jose Mourinho, who was left go at Old Trafford this morning after what has been a terrible half season for the mighty Reds. Losing to Liverpool on Sunday proved to be the last nail in the coffin.

Neville spoke to Sky Sports after it became clear Mourinho got the boot, as quoted by The Mirror: “For me the next manager of Man United should be Mauricio Pochettino.

“When I look at the values of Man United, I look at his belief in young players.

“His performance levels, style of play, the way he’s carried himself.

“I was fortunate enough to spend two or three days at Tottenham’s training ground.

“My view is he is somebody who brings the three key principals of the club: style of play, promotion of youth and winning football matches.

“He is the person who is the outstanding candidate.

Michael Carrick will remain interim manager until United announce a caretaker manager until the end of the season. They hope to announce one in the next 48 hours.

“Michael gets the football club,” admits Neville. “Michael will get all the support from the people inside, the fans.”

Nobody expected this news so quick and I was only arriving to my desk as it broke.

It was expected that United would wait until it was mathematically impossible to qualify for the Champions League next season, but it appears as though they wanted rid of Mourinho at an earlier date to prepare a rebuild.

Pochettino won’t leave Spurs midway through the season as his project is still very much a thing, though he is likely to jump at the opportunity to manage a club as big as United.

But will Real Madrid try step in or will they go back to Mourinho to massage his ego further?