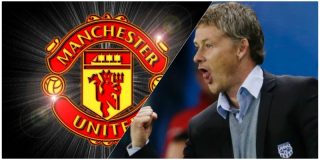 BBC report Simon Stone reveals Manchester United are considering Ole Gunnar Solskjaer as caretaker manager until the end of the season after José Mourinho was sacked this morning.

It sounds like Manchester United want a caretaker manager with links to the club among the requirements and few come more emotionally attached than the Baby Faced Assassin, who played an instrumental role in the club’s second European triumph back in 1999.

Currently managing Norwegian outfit Molde, the 45-year-old will forever be seen as a legend at Old Trafford, though his managerial experience at the top level is limited.

Stone from the BBC just tweeted to say he’s been told Solskjaer will be considered for the role, however, that doesn’t mean it will be him.

Am told Ole Solskjaer is under consideration as caretaker at Old Trafford. Doesn’t mean it will be him but ticks all boxes – apart from being employed already of course.

There’s something exciting about this development and I hope it’s not purely based on romance. United still have a lot of work to do this season, involving hills to climb, and Solskjaer has never managed at the very top before.

Two legs against Paris Saint-Germain in the last 16 of the Champions League, the FA Cup and the top four. Whoever gets the caretaker role must aim to make a statement.

Would you like Solskjaer to come in and manage United until the end of the season? The club could make a worse appointment.