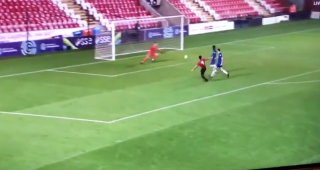 Manchester United wonderkid Mason Greenwood can’t stop scoring and on Monday night he added another three goals to his account against Chelsea in the FA Youth Cup.

If Greenwood keeps on scoring at this rate, it should be only a matter of time before he’s knocking on the door of the first-team, and it certainly helps his cause that Romelu Lukaku has been struggling to find form this season.

The jump from youth level to the first-team, however, is a big one and it might only come at a time when manager José Mourinho is stuck for options, with United no longer involved in the League Cup after being eliminated earlier this season on penalties against Championship side Derby County.

United-18s coach Neil Ryan welcomed Chelsea to Leigh Sports Village for the third round of the FA Youth Cup, a youth competition dominated by the Blues, who have won it consecutively since 2014. United last won the Youth Cup in 2011 – beating Sheffield United 6-3 in the final – with a team consisting of Paul Pogba, Jesse Lingard and Ravel Morrison.

Tonight saw a hard-fought battle as the Reds beat the holders 4-3, thanks to a hat-trick from Greenwood and another goal by Dishon Bernard. It means the competition will have new winners this season.

The lads face Brighton in the fourth round of the FA Youth Cup.

Greenwood’s first came from a high press, forcing the Chelsea goalkeeper into making a mistake.

A slip by the keeper allows in @_MasonGreenwood who takes his chance brilliantly. 1-0 United pic.twitter.com/Xq7Vkj1Uex

His second was a comfortable finish.

Another brilliant finish by @_MasonGreenwood to put United back in front. 2-1 pic.twitter.com/1H7gRtUvYX

United’s third, scored by Bernard, was scrappy to say the least but we’ll take it nonetheless.

Then, a classy finish to complete the hat-trick.

It’s a magnificent hat trick for @_MasonGreenwood and United despite being down to 10 men are 4-1 up pic.twitter.com/oGNIz0kkMr