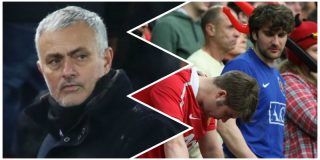 Jose Mourinho’s approach is so ultra-cynical it is no wonder so many of Manchester United’s players look shunned of their former selves, and The Independent’s chief football writer Miguel Delaney believes the Portuguese tactician is past it!

Give it time and the diagnosis which sucked every bit of footballing ability out of the current crop will latch on to promising youngster, Diogo Dalot, who was recently up for the Golden Boy 2018 award.

Nine months have passed since Sevilla knocked us out of the Champions League, a draw many of us fancied only for Mourinho to throw up a mind-boggling display.

The strategy under Mourinho is simple: wait for the rival to make a mistake, go get your reward. It’s neither brave nor entertaining and involves very little risk. Hope for the best, kick and rush – just pray something works out.

Liverpool ultimately dominated United at Anfield but we hung on for longer than we should have, thanks to a rare mistake by Alisson Becker, palming a Romelu Lukaku cross into Jesse Lingard’s path. This goal came against the run of play. Nobody said at half-time ‘we deserved that!’

In order to understand Mourinho as a manager you must understand his terror of losing. He goes into game thinking about how to avoid defeat before thinking how his players can win. That, as a Manchester United fan, is truly unacceptable.

Delaney thinks it now seems undeniable to claim Mourinho is “past it” or that the game has left behind, and it’s hard to argue with that…

He adds another pretty damning line to his article: “And it does now seem he has nothing else to offer.”

The United boss is obsessed about the physicality of his players, while the modern manager prefers to look at the technical side and evolving their players. People will use trophy counts but right now, in this moment in time, Mourinho has fallen behind managers like Jurgen Klopp, Pep Guardiola and Mauricio Pochettino.

A reoccurring criticism thrown at Mourinho is how he’s brought no sign of football identity with him to Old Trafford – something that is demanded nowadays and has been achieved already by Maurizio Sarri at Chelsea, despite only arriving at Stamford Bridge this past summer. Ralph Hasenhüttl is trying his best to do the same just under two weeks after taking charge of Southampton.

Unfortunately, the Mourinho saga will drag on another while but the sooner everyone has this misery lifted from their shoulders the better. It’s become tiring watching the club I love.