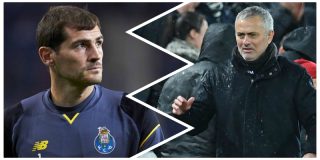 Eight years on, the feud is still alive.

Jose Mourinho is getting it from all corners as his current Manchester United side is in disarray.

The Portuguese tactician is struggling with his United team positioned sixth in the Premier League, an embarrassing 19 points adrift off leaders Liverpool following Sunday’s 3-1 defeat at Anfield.

While our season has been hampered by injuries, it doesn’t quite excuse how underwhelming United have played this season, with a woeful defence and uninspiring midfield.

Now, former Real Madrid player, Iker Casillas, has tweeted more ammunition against Mourinho: “According to a Portuguese newspaper someone said that a player like me (37 years) is at the end of his career. Completely agree! My question, for that newspaper: in the case of coaches, when and what point do we see that they are no longer of capable of leading or training a team?”

Casillas stunningly hits out at Mourinho’s leadership and training methods, and anybody who reads newspapers regularly or listens to analysis on TV or radio will be aware this isn’t something new. You only have to watch when United cross the halfway line to see how quickly our exceptionally talented forward players run out of ideas.

Mourinho fell out with the former Spain No.1 during his time at the Bernabeu. Casillas was referencing comments recently passed by his ex-manager, suggesting the veteran keeper was sounding like a player at the end of his career, as per The Independent. (It’s worth mentioning that David de Gea has not involved himself in this spat)

Interesting timing for Casillas to speak out – hours after United suffered a bad defeat at the hands of rivals Liverpool, a club he was linked with before they signed Alisson Becker, as per the Daily Express.