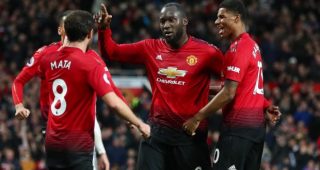 The transfer rumours are flying in. Some you will dismiss and others you will hope have an inch of truth.

Two reports from the same Spanish outlet caught our eye on Monday, each linking a Manchester United player with a move to European champions Real Madrid.

The La Liga side have had a difficult campaign thus far which saw Julen Lopetegui dismissed as manager only 138 days into the job and replaced by Santiago Solari.

While they have qualified for the Champions League knockout stages – drawn against Ajax in the Round of 16 – Los Blancos are positioned fourth in the league, five points adrift of leaders Barcelona. Not quite Manchester United’s level of direness, but still not good enough.

It’s pretty evident from watching Madrid this season that they don’t have the same firepower. Of course, they’re notably light up front after losing Cristiano Ronaldo to Juventus in the summer, and both Karim Benzema and Gareth Bale have thus far failed to fill the void.

That has led to suggestions that Real Madrid president, Florentino Perez, needs to dig into his pockets again to fix the problem, as is usually the case with Spain’s biggest football club.

Don Balon, who we usually take with a pinch of salt, have thrown Romelu Lukaku into the mix despite suffering a massive dip in form this season. They suggest he wants to leave Manchester United and is keen to take advantage of this situation at the Bernabeu.

Tongue in cheek or what? If Real Madrid want to sign a world-class striker in the near future, it’s hardly going to be a footballer struggling to make it across the pitch, never mind find the back of the net each week.

The report goes further to suggest the Belgium international does not have a good relationship with manager Jose Mourinho and dreams of playing in Spain.

Next up, and perhaps least surprising, is Pogba after what has been another underwhelming season for the midfielder. A separate Don Balon report claims Pogba is eager to try his luck with a move to Spain, with interest from Real Madrid.

But the Spanish giants are only willing to pay €80 million for Pogba considered his dip in form since returning to Old Trafford. It’s going to be difficult for United to recoup the total amount of money it cost to sign Pogba – it hasn’t worked out – but the plan should be to spend whatever money is there wisely.

Is that too much to ask?